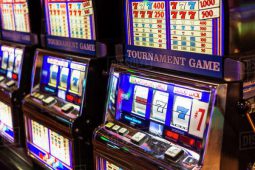 The vote that took place on Tuesday increased the cap from 100 to 180. Credits: Dissolve.com
by Paul Lancaster

The Carbondale council approved an initiative to raise the number of gambling machines in Illinois city from 100 to 180.

US.- Illinois approved a massive gambling expansion earlier this year, and cities around the Prairie State are getting ready to implement those changes. The Carbondale city council approved on Tuesday a move to increase the number of gambling machines allowed in the territory.

The state laws only allowed five machines per licence, but the recent gambling expansion increased that number to six. Thus, the council examined the current 100-machine cap set in the city’s ordinance, The Southern Illinoisan reported. Currently, Carbondale issued 11 licences and has two pending applications. If they approve these licences, the current cap would be over the limit.

The vote that took place on Tuesday increased the cap from 100 to 180, opening the door to several more licences in the near future. Mayor Mike Henry said that the increase was large because he does not want to return to the issue for a while. At some point, the city debated eliminating the cap altogether, but decided to stick to a limit.

The Senate approved on June 2 an expansion bill that adds six more casinos and approves sports betting in Illinois. The bill authorises six new casinos in downtown Chicago, Williamson County, Rockford, Waukegan, Danville and South Suburbs. Those facilities, as well as racetracks and sports venues will also be eligible to buy sports betting licences. The venues need to feature more than 17,000 seats to be eligible.

“Legalised sports betting and expanding gaming will create jobs up and down the state… where communities hungry for employment will see 10,000 new jobs,” said the Governor after the House approved the bill by 87-27 and sent it to the Senate. “Gaming expansions in this state failed for years. This is a victory for the whole state,” he added.