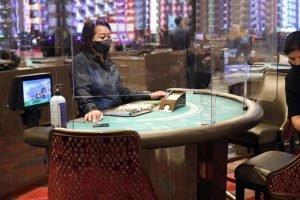 Belgian casinos can reopen from Wednesday June 9.
by jfoley

The Belgian government has published rules for the reopening of casinos, gaming halls and bookmakers.

Belgium.- The Belgian government has published new rules for the reopening of gambing venues in its official gazette.

The rules set out protocols for the reopening of casinos, gaming halls and bookmakers following the easing of Covid-19 countermeasures. Venues will be able to reopen from Wednesday (June 9). They will initially be allowed to open only until 11.30pm.

Masks will remain mandatory and customers can attend in groups of up to a maximum of four people.

Every venue must ensure at least 1.5 meters per person, provide hand sanitisation for staff and customers and regularly disinfect any equipment used.

The government also published a new protocol to grant the Belgian Gaming Commission access to federal personal data to identify a visitor to a class I or II gaming establishment as a member of the Integrated Police and then ban them from gambling.

The data must be transferred daily to keep up to date with changes to the Integrated Police force’s staff.

Publishing its annual report, the Belgian Gaming Commission (CJH) has revealed that it issued 23 sanctions in 2020.

The regulator reported that it started the year with a backlog of more than 100 cases and that 68 more cases were added during the year. It issued sanctions in 23 of the cases, handing out €59,958 in fines.

It chose not to issue sanctions for 67 of the initial cases, either because no violation of regulations was identified or because of the time that had elapsed.

In April, the Belgian Gaming Commission launched a campaign to tackle unlicensed gambling under the slogan “Always Play Legally”.

Created in consultation with licensed online gaming and betting operators, the campaign will run until the start of the UEFA Euro 2021 tournament on June 11.

It aims to raise awareness of which operators are licensed in Belgium and to educate consumers so they can identify the difference between legal and illegal online gambling platforms.

The campaign has its own website, www.alwaysplaylegally.be, and operators who have received written permission from the CJH will be able to use the Always Play Legally logo.