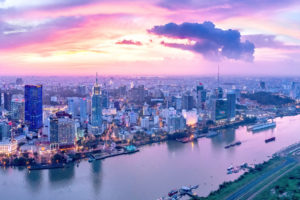 The new integrated resort is expected to open in 2025.
by

Work has finished on a highway that links Van Don Airport with the location where the new integrated resort will be located.

Vietnam.- The province of Quang Ninh in Vietnam has completed a vital highway linking Van Don Airport with the location where Sun Group plans to build its new IR in the Van Don Special Economic Zone.

The 15-kilometre highway has been under construction since 2017 at a cost of VND1.4 trillion (US$60 million).

The total estimated investment capital in the project is VND47.5 trillion (US$2.1 billion), of which Sun Group has made a capital contribution of about VND6.9 trillion (US$300 million).

The company has announced it expects to open the IR in 2025.