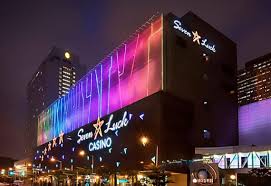 Grand Korea Leisure casino sales were up 16.3 per cent from July.
by franz

Grand Korea Leisure (GKL) has reported KRW8.80bn (US$7.6m) in casino sales for August, up 16.3 per cent when compared to the previous month.

South Korea.- The South Korean operator of foreigner-only casinos Grand Korea Leisure (GKL) has reported that casino sales were up 16.3 per cent when compared to the previous month, from KRW7.57bn (US$6.62m) to KRW8.80bn (US$7.6m).

Despite the rise when compared to July, sales were down 31 per cent year-on-year from KRW12.76bn.

Grand Korea Leisure has registered KRW56.66bn in casino sales for the first eight months of the year, down 64.6 per cent year-on-year. Table games aggregate sales reached KRW47.51bn between January and August, down 66.3 per cent. Machine game sales were KRW9.16bn, down 52.2 per cent.